FRIDAY FUNNIES: Red and white and seven all over

A Bangalore real estate agent’s marketing gimmick to attract business, revolving around the colours red and white (check out image below) and the number seven, has blown out into an all-consuming obsession.

Indian real estate agent Sevenraj's father named him after the number seven, and since then he has spent his life surrounding himself with the number, the UK's Daily Mail reported.

Sevenraj said his father named him after the number as he was the seventh child in his family, and he now has only seven buttons on his blazers and even his telephone number ends in 777.

He also speaks seven languages, including his native Malaysian, as well as Hindi, English, Tamil and Marathi.

However, the obsession does not end there: Sevenraj has also developed an extreme fixation on the colours red and white.

While his obsession with the number seven began at birth, his peculiar attraction to red and white started as a wacky marketing gimmick and has seen him become a local sensation.

There is now no doubt that what started as a tool to attract people to his business has taken over his life.

Everything in Sevenraj's life is red and white - even his family dresses in the colours.

In fact, even toothpaste is only bought in red or white tubes and he and his wife, daughter and son eat from red and white plates, with red and white knives and forks, while sitting on red and white seats.

Far from being embarrassed by it, Sevenraj said he enjoys the attention and his dream is to become recognisable.

That dream is fast becoming reality, with Sevenraj already achieving local celebrity status and many news channels and papers curious about his strange colour scheme. 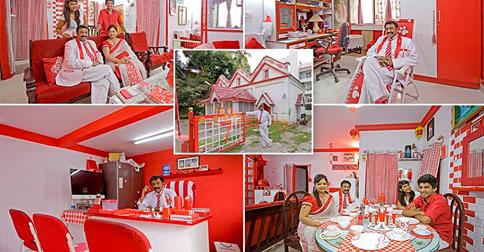 FRIDAY FUNNIES: Red and white and seven all over