Real estate agents are going to extreme lengths to ensure the language barrier knows no barriers during auction, with one agent using LED boards showing a bidder’s number and price in real time.

Century 21 Cordeau Marshall principal Craig Marshall is using the system and says for foreign buyers it solves the problem of writing bids on a piece of paper, which can be very confusing.

“It also removes the issue of having to call an auction in another language, because everyone can read numbers and make an educated decision on whether to put in a bid or not,” Mr Marshall said.

“The reason it is effective is because it makes the process of auctions comfortable for all parties involved.”

A spokesperson from NSW Fair Trading said the current law does not stop an auction being translated into another language, however, the conditions of sale must be in English.

“If the auction is subject to different conditions of sale, these conditions must be clearly displayed and communicated to bidders before the auction starts,” a spokesperson for the department said. “By law, an agent must complete a Bidders Record in the English language.

“The auctioneer and other agents present at an auction should refer to the Bidders Record to assist in determining the language that bidders may speak or understand, but this should not be the only determining factor.”

AuctionWORKS principal David Scholes is not fazed by dual-language auctioneers, saying there should be no issue with it "as long as the auction is conducted completely in English, with parts such as prices and relevant topics regarding terms and conditions being translated into other languages".

“Competent agents who operate in areas influenced by Asian money often employ Cantonese or Mandarin-speaking staff members, and we always make sure we position them in the audience as the bidding starts so they can qualify everybody,” Mr Scholes said.

“We always encourage non-English-speaking bidders to bring an advisor or family member that can sit with them, or if they hold the right authority they can bid for them. We also use bid display boards in our auction rooms, so that non-English-speaking people can see the bid as well as hear it.” 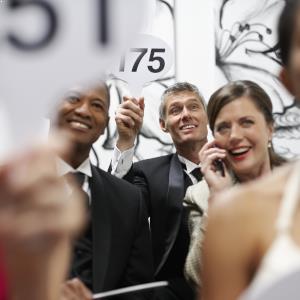