The Sunshine State's key regional centres are beginning to reap the benefits of growing buyer confidence heading into 2015.

The Real Estate Institute of Queensland’s Queensland Market Monitor (QMM) for the September quarter 2014 shows real estate markets in regional Queensland are gearing up for growth in the wake of a strengthening property market in the south-east.

REIQ CEO Antonia Mercorella said that, along with Cairns, the south-east continued to be the star real estate performer.

“House sales activity across south-east Queensland continued to improve over the September quarter, with preliminary figures revealing a five per cent rise across Greater Brisbane,” she said.

“In Toowoomba, the median house price rose one per cent on the back of four per cent sales growth for the quarter.”

Ms Mercorella said Cairns had a strong September quarter, with sales volumes for houses and units increasing by more than 30 per cent.

“Cairns also recorded the greatest improvement in average vendor discounting outside the south-east, and it’s fair to say the local real estate market has really hits its straps heading into 2015,” she said.

“Listing numbers have also begun to improve in many regional centres, a sign that vendors are becoming increasingly confident about current selling conditions.

“Average days on market and average vendor discounting have improved markedly in most regional centres, with a number of markets returning to double-digit sales growth,” she added.

The QMM also showed improvements in unit and townhouse markets across the south-east and many other parts of the state.

“Preliminary unit and townhouse sales were up 11 per cent in Greater Brisbane, on the back of strong results in the Logan and Ipswich regions,” Ms Mercorella said.

“Meanwhile, strong unit sales in Cairns in the sub-$250,000 price bracket contributed to a drop in the median unit price.

“With activity typically lagging the house market by at least one quarter in most regions, the unit markets across most major centres are enjoying improving overall market conditions.” 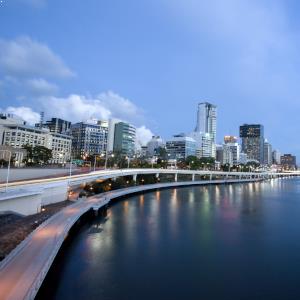