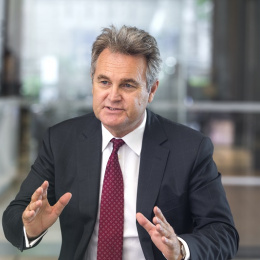 Bernard Salt is widely regarded as one of Australia’s leading social commentators by business, the media and the broader community.

Bernard heads The Demographics Group which provides specialist advice on demographic, consumer and social trends for business. Prior to that Bernard founded KPMG Demographics.

He writes two weekly columns for The Australian newspaper and is an adjunct professor at Curtin University Business School. Bernard also holds a Master of Arts degree from Monash University.

Bernard Salt is one of the most in-demand speakers on the Australian corporate speaking circuit and has been so for more than a decade.

He is perhaps best known to the wider community for his penchant for identifying and tagging new tribes and social behaviours such as the ‘Seachange Shift’, the ‘Man Drought’, ‘PUMCINS’ (pronounced pumkins) and the ‘Goats Cheese Curtain’. He was also responsible for popularising smashed avocados globally.

Bernard has popularised demographics through his books, columns and media appearances. His body of work is summarised in six popular best-selling books. Bernard appears regularly on radio and television programs and recently hosted a business television program “The Next Five Years” on SkyNews Business Channel 602.

He was awarded the Member of the Order of Australia (AM) in the 2017 Australia Day honours. Daniel McCulloch stands as one of the regions most well respected and motivated agents. As Managing Director of McCulloch Agencies, Daniel is excited to launch his vision of a new generation agency, empowering his team with digital tools and resources to be at the forefront of the industry.

As a leader in the industry for more than 14 years, as a partner and shareholder in an agency with 11 locations throughout regional NSW, Daniel brings unparalleled knowledge and experience to his role as Managing Director. Awarded for his auctioneering capabilities, Daniel is also prized in the business sphere, being presented as Young Executive of the year in the 2016 NSW Business Chamber Awards.

Daniel brings an intense passion and energy to the table, with a commitment to exceeding client’s expectations and deliver a premium service. With extensive local experience, loyal client base, and exceptional history of results, the keys to success are in his hands.

A proud father of three daughters, and husband to wife Karina, Daniel has a family-orientated approach in how he leads, with a gentle and fair hand. Understanding the importance of face to face relationships, you won’t find Daniel at his desk often – always on the ground, and passionate about understanding his client’s requirements.

Jessica Ridley is a senior journalist, presenter and media consultant with more than a decade’s experience in Australia’s biggest TV and radio newsrooms.

She has been a regular face on the Seven Network Australia, seen daily on Sunrise, the number one breakfast show, 7NEWS Sydney and other programs including The Morning Show. Prior to this, Jessica was a news reporter for Sydney’s top talkback radio station 2GB.

Jessica has developed a reputation as a highly engaging and versatile journalist with strong skills in live television and breaking news. She has covered significant events including the COVID-19 pandemic, state and federal elections, bushfires, floods and high profile court cases. She has been afforded access to four Prime Ministers and three New South Wales Premiers, regularly interviewing government policy makers and corporate decision makers. She has also worked across finance, real estate, technology, consumer and health.

She is now a regular commentator on Channel Nine’s Today Show Extra. She writes opinion pieces for The Daily Telegraph and is a contributor for numerous publications.

Jessica hosts a broad range of events including corporate roadshows, business summits and awards nights. She enjoys sharing some of her insights as a journalist to equip business leaders and spokespersons with handy tools to be in control during a live or pre-recorded TV, radio or print interview. She is also sought after as a keynote speaker on effective communication in the workplace.

Away from the cameras, Jessica is a new mum to son Frank and learning how to juggle career and family life. She’s passionate about fitness, music, good food and good wine!

You'll often hear Jodie saying Property Management has been great to her. She's had a dream run, owing her success to working with the best leaders in the industry who have powered up her learning and career.

A career spanning 20+ years, Jodie has dedicated herself to learning and immersing herself in all areas of property management and property investment. Working in State and National roles across the two largest Australian-based International Franchises and a National role within a successful property management tech company, Jodie's knowledge across all areas of the business is vast and she's seen as a leader within the industry, having twice been awarded in the Top 50 Real Estate Influencer's List by Elite Agent.

Passionate about customer service and the future viability of the industry, Jodie believes that the traditional property management model is lacking leadership and therefore client results are compromised. Seeking to change this, Jodie is pioneering a model that sees the property manager entering business ownership, creating wealth for themselves and being responsible for client outcomes directly. The partnership model with Coronis sees the client enjoy a boutique, personalised experience with one point of contact - the business owner, backed by a large Corporate to ensure best-in-breed technology, systems and market reach.

'It's a truly innovative approach to old problems and we couldn't be more excited about how well it's being received by both property managers looking to improve their life, and our customers who love the personalised, improved outcomes. Recently awarded Australia's TOP 100 AGENTS by Rate My Agent in 2020 and 2021, Matthew prides himself on receiving positive real reviews from real clients which have resulted in him being awarded #14 on the REB top 100 list

Striving to exceed every client’s expectations, Matthew has the ability to tailor his service to individual clients and situations allowing him to provide the ultimate customer experience.

In his 21 years as a leading agent, Matthew’s career success is evident in the impressive number of reviews, referrals and repeat business that come his way. He thrives on the negotiation process and prides himself on his willingness to go the extra mile for his clients.

As an exceptional leader of the team, Matthew shares in the successes of his team and takes pride in recent wins at various levels. Exceptional efforts by the team throughout 2020 saw Richard Matthews Real Estate named as the #1 Real Estate Agency across five local suburbs.

2020 also saw Richard Matthews Real Estate named the 7th best agency in the NSW and came in at 26th Australia wide with an array of other wins to agents within the innovative and driven team. A number of our sales and property management team won awards across their core areas.

Matthew embodies genuine passion for our industry. Sharing the same vision and unparalleled levels of service that are synonymous with the Richard Matthews brand, Matthew is a strong representative and leader within our agency but to the entire market.

After 25 years in the investment world, Michael established reimagined habitat to look at how we will live in the future, look at global best practice for energy efficient and sustainable design practices to help more better buildings get built.

Richard provides a professional service based on integrity, hard work and meticulous attention to detail. This is supported by the huge amount of referral work and repeat business he receives.

Long considered one of the area’s leading agents, Richard brings 28 years of combined Autioneer and sales experience to the table. Having grown up in Strathfield and with a Father in real estate, Richard has been attending auctions since 1979. Like father Like son. Richard is an expert in the Auction process and one we are proud to have represent the team every day.

Connected to the community, and having attended St Patrick’s College, he now continues to enjoy living in the area with his wife and two daughters, contributing to his exceptional knowledge of the local area and market.

Thriving on results that consistently exceed client expectations, Richard is energetic with a passion for the industry that is truly contagious. Showcasing an unbeatable level of service and negotiation skillset, he reflects a warm and personable nature as well as being highly respected throughout the industry and local area.

As a profound mentor of our team, Richard shares in the successes of his team and takes pride in recent wins at various levels. Exceptional efforts by the team throughout 2020 saw Richard Matthews Real Estate named as the #1 Real Estate Agency across five local suburbs.

2020 also saw Richard Matthews Real Estate named the 7th best agency in the NSW and came in at 26th Australia wide with an array of other wins to agents within the innovative and driven team. A number of our sales and property management team won awards across their core areas.

Through record results and his outstanding success rate, we are proud that Richard, as a Director, leads the Richard Matthews brand with honour.

The Conference starts in

See you at the event! Get early bird tickets for