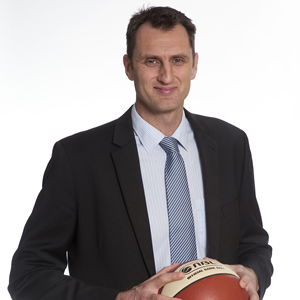 NBA basketballer and Olympian Chris Anstey explains why the lessons he learned on the basketball court apply to real estate or any other business. “You never know who’s watching” – that was a lesson learned early on by basketballer turned businessman Chris Anstey.

Anstey’s sporting career was turned on its head at age 17, after he was spotted by a scout at one of his local weeknight games. Since then, the now 40-year-old has accomplished great feats, including playing at the Olympics, the American NBA and the Australian NBL.

But there’s more to this sports star than meets the eye. He’s also a father of three with a love of business projects and anything to do with encouraging today’s youth.

He says it hasn’t always been easy. He’s faced a few setbacks during his career. But it’s been his persistence and ability to surround himself with uplifting and hard-working people that has got him to where he is today.

How he made it to the top

Although known for his skills on the basketball court, Anstey first had dreams of becoming a professional tennis player.

“I played tennis from six to 17 years old, which really helped me develop skills that would help me in any sport – footwork, perception, touch and self-motivation,” he says.

“My dream was to play at Wimbledon. However, I realised at 17 years old that it was becoming an unrealistic dream.”

Instead of giving up on his dream of becoming an elite sportsman, the seven-foot-tall Anstey took the setback in his stride, turning his attention to a new sport – basketball. He was quickly noticed by a scout from the Melbourne Tigers basketball club, at which point Anstey put his mind to becoming the best of the best.

“I didn’t realise I had been given an opportunity, but when presented with it, wanted to run with it,” he recalls.

“I realised, however, that I needed to spend significantly more time working on all aspects of my game to catch up to others, and did so immediately.

“My daily routine away from team training usually involved between two to four extra hours of shooting, lifting and learning. I played for the Melbourne Tigers NBL team 18 months later.”

The rest is history. Anstey spent one season with the Tigers and was then signed by South East Melbourne Magic, where he remained until 1997 before being selected as number 18 overall in the 1997 NBA draft by the Portland Trail Blazers in the US.

Anstey was also a member of the Australian Boomers, competing in the 2000 Sydney Olympics and again at Beijing 2008.

Around these two Olympic appearances, Anstey played for Russian club PBC Ural Great Perm and UNICS Kazan, before returning to his original team, the Melbourne Tigers, in 2006. He then retired from the sport in 2010.

After a whirlwind international sporting career, Anstey now spends his days coaching the next generation of sporting stars at Caulfield Grammar.

He also works for an event marketing company, A Positive Move, and does corporate appearance work with Melbourne City Hyundai. Anstey was also recently named as a company ambassador for La Trobe Financial.

To be successful in any career, Anstey says you need willpower.

“Your body quits a split second after your mind tells it to,” he insists. “Not many people will discover the best possible version of themselves because they make safe decisions.

For many leaders, personal goals and team goals can be difficult to balance. For Anstey, group success always comes before the individual’s.

“I think the individual opportunities and success will come due to the fact that you’ve been part of a successful team,” he says.

“For me, it’s about drilling back to behaviours and habits, figuring out how good each individual can be and collectively impact the group.”

To achieve your personal goals in a team environment, Anstey says you need to ensure you have the right people – whose goals align with your own – surrounding you.

“You can teach the right people any skill. You can’t teach the wrong people the right personality, loyalty, honesty and ingenuity,” he says. “Go and find a few people who share similar goals, and work towards them together – achieving goals by yourself is near on impossible.”

“I don’t think any leader can be solely responsible for making sure everyone achieves their goals,” he adds.

“It’s a matter of making sure that you find like-minded people with similar goals and place them around each other to encourage a working relationship where they challenge each other.”

Aspiring leaders working their way up the ladder shouldn’t forget the basics, according to Anstey.

“Don’t try too hard; just be yourself. I think insincerity shows and you just can’t be all things to all people,” he says.

Anstey says having the right attitude is the key to becoming a successful leader.

“There are times where you come across a lack of motivation, but there’s not ever any time that I can remember where I ever wanted to quit,” he says. “It’s unusual that everybody in a group is struggling at the same time and by having the right people around you, you’ve almost got an insurance policy that they’ll give you support and they’ll continue to bring you along to where you need to be, and vice versa.”

Putting value on your team is just as vital when building a business as it is during a game, Anstey explains.

“It’s about creating a sense of inclusiveness and valuing what everybody does. Get to know [your staff] away from work and understand what’s important to them so you can set about helping them achieve that.”

Anstey suggests the best thing any aspiring leader can do is adopt similar principles to other leaders they admire.

“The best [coaches] I ever had [were] Brian Goorjian and Des Middleton. Des Middleton was my junior coach and the best thing that he could do was make me feel included in the group, because it was a new sport and I was very uncomfortable. He made me feel welcomed and made it fun,” he says.

“When people ask about [NBL coach] Brian Goorjian, they ask what his best quality was. He had this ability to make every single person who played for him feel like the most important player in the team and, no matter what he taught you, you bought in because you knew he was on your side – there was nothing selfish about that,” Anstey says.

Anstey took what he learned from his two coaches to help guide him through his professional life – lessons he still applies today.

“For me, it’s about having that empathy with every single player in the team or every single employee in the group to let them know that you care,” he says. “Successful people aren’t measured on what they have to do; it’s what they’re willing to do.”

Looking to the future

Having so many projects means every day is different for Anstey.

Above everything, though, he aims to create a healthy work-life balance – something that many aspiring leaders can relate to.

“As a father of three beautiful children, I am always busy. [My goal is] to achieve a great balance between work and family by trusting the values and lessons I’ve learnt over the years, [and] most importantly, surrounding myself with great people who inspire me, teach me and whose company I enjoy,” Anstey says.

Anstey aims to continue living his life with no regrets, treating every failure as a lesson.

“There can be positive lessons learned in any situation. Too many people shield themselves and others from failure. I learned to embrace it, learn from it and use it as motivation,” he says.

“One injured body part creates an opportunity to strengthen others.”