Australia’s best young agents surged to the top of the Young Guns ranking by learning how to handle objections to their inexperience.

BresicWhitney agent William Phillips, who topped the ranking, said he managed to overcome this credibility gap by positioning himself as someone who helped people, particularly buyers.

“By doing the right thing by people, they started to come to me for advice because they could see that I actually cared and that I knew what I was talking about. That just builds trust. Once you can do that, then the age isn't really a barrier,” he says.

“If they've only just met you then age might be an issue, but I would use time to my advantage to show them that I knew more about the area and cared about them more than my competitors.”

Lucas Real Estate director Baden Lucas, who placed sixth in the Young Guns ranking, says rookie agents need to build their knowledge if they want to build their credibility.

“Everyone always asks me, ‘How do you make sure that people who are twice your age and worth more than 100 times than you are listening to what you’re saying?’ The important thing is having product knowledge – that’s the foundation of having strong credibility,” he says.

“I’ll never forget I had an agent attend an open-for-inspection of mine in the Docklands and he could tell me more about the property than I could. That was such a wake-up call to me to make sure that knowledge was at the top of my foundations.”

Mr Lucas believes he’s now the most knowledgeable agent in his area, and is fully across his competitors’ listings and stock that is due to hit the market.

Marc Gable from McGrath Estate Agents Brighton-Le-Sands, who placed ninth, says the biggest hurdle he faced when he entered sales was differentiating himself from the experienced agents and selling principals who worked his patch.

“I used the strength of the brand and I talked a lot about the brand more than my own personal success,” he says.

Mr Gable says that he also tried to compensate for his lack of experience by impressing vendors with energy and enthusiasm.

“I know it’s not tangible, but you had an agent sitting in your lounge room who’s tired and stressed versus an agent who’s eager and responsive and focused – the client is going to feed off that and will give you a shot,” he says.

‘There’s never anything wrong with the market’

Rookies need to ditch the excuses if they want to turn themselves into successful agents, according to number two-ranked Adam Denina from Starr Partners Parramatta.

Mr Denina says new agents need to accept responsibility for their results and ditch the mentality that “it’s always someone else’s fault” if they have a bad month.

“It’s not going to be anyone but the agent’s fault if you don’t succeed. So take responsibility for what you do. Don’t hide; be accountable.”

Mr Denina regards it as a blessing in disguise that his market was slumping when he started selling real estate in 2004.

The downturn forced him to learn the fundamental real estate skills that continue to serve him well today.

“I learned pretty quickly that if you didn’t stick with a client, whether it be a buyer or vendor, then they wouldn’t be interested in dealing with you,” he says.

“People who start in a good market know nothing more, so when the market dips, they haven’t had crucial conversations with vendors and haven’t had to ask for price reductions. So it takes them a lot longer to adapt to a crap market, whereas you get to see it with more clarity when you’ve been there and done that before.” 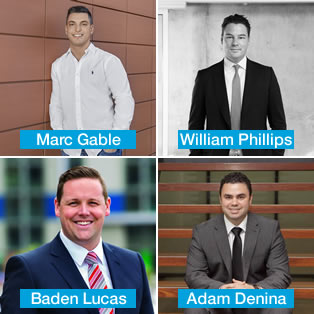 Melbourne breakdown: How suburbs are coping amid s ...