To fairly determine the best sales offices in the country, and adjust for geographical volume advantages, performance is considered across two key parts of the business: scale and efficiency.

Scale is always important, given that bigger volumes intrinsically require a higher level of management skill, and cannot be ignored.

So sales volume (the dollar value of the properties sold) and the number of sales are two metrics that make up half of the score.

But performance is as important as scale, and together they give a solid, 3D understanding of a sales office’s complete performance.

The results in 2017 are illuminating.

All of the top 10 reported sales volume above $170 million, with fourth-placed Ray White Double Bay recording a whopping (and geographically appropriate) $798 million in sales.

More instructive, though, are the conversion and staff efficiency ratios. Again, the top 10 set an impressive high-water mark: above 90 per cent for conversions and a quotient above 20 for staff efficiency. This means that at least nine of every 10 listings was sold and each sales staff member accounted for at least 20 sold boards.

Melbourne’s Fletchers Projects, in third place, is worth having a closer look at. While its sales volume was on the low side at $219 million, it shot the lights out of the performance markers with 166 per cent conversions and a remarkable 41.88 staff efficiency quotient.

NSW and Victoria dominated the top 10. NSW edged past Victoria with six offices overall, and four in the top five.

Of the other states, Queensland performed the best with 11 offices in the Top 50. South Australia came next with three, Western Australia with two, and there was one office from the ACT.

The independents did exceptionally well – taking out the top three spots, six in the top 10 and accounting for 21 overall.

Similarly, regional offices punched above their weight, not only taking out the top spot and three in the top 10, but also accounting for 18 offices overall.

Of the franchised groups, LJ Hooker, Ray White, and Barry Plant and Harcourts featured well with eight, six and three each respectively.

In the coming weeks we’ll profile some of the Top 50 Sales Offices for 2017, so stay tuned for a more in-depth look at how and why these offices are doing so well. 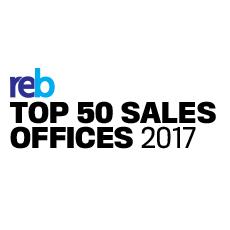