The Top 50 Sales Offices report, sponsored by Agent Box and APM/PriceFinder, gives you an exclusive inside view of what drives the nation’s top performing real estate offices.

This report reveals business practices, technology and sales strategies behind the most successful offices in real estate. What's more, you'll see all of their key performance metrics, allowing you to benchmark your business against the industry's best.

Jump to the full rankings

These 50 real estate offices are the best of the best. But the best at what?

Winning a place on the Top 50 Sales Offices list is proof that an office is a strong all-round performer.

This is not a ranking of the offices with the most listings or the most sales or the highest volumes. Rather, it takes a big picture view of an office’s entire performance in 2013/2014.

Yes, that includes listings, sales and volumes – but it also includes things like staff efficiency and conversion ratios.

This helps level the playing field and means offices from outside the traditional powerhouse centres have a chance of cracking the Top 50 list.

All states and territories except Tasmania were represented, while 24 per cent of the entrants came from outside the capital cities.

Another important point is that the ranking methodology doesn’t automatically regard big as beautiful. Almost half the offices on the list had fewer than 10 sales staff – and the winner, Magain Real Estate, had just six.

So what is it that sets these 50 offices above the thousands of others throughout Australia? One common attribute is their relentless focus on productivity. This can include measures such as running a highly selective recruitment process, working hard to keep employees happy and maximising the amount of time agents are able to devote to selling and listing.

Earning a place in the Top 50 is the ultimate form of validation. Yet many of these offices believe they still have room for improvement. Talk to some of the principals and they will tell you about new systems they plan to introduce or new markets they intend to tap. They are also believers in the value that business consultants and real estate coaches can provide.

The last few years have been good for agents: rates have been low and most markets have been strong. Sooner or later, though, rates will rise and activity will slow. When that happens, it is the most productive offices that will have the best chance of surviving the downturn.

Agents could do a lot worse than to use these Top 50 offices as models for future-proofing their businesses.

The methodology for this report was based on four key metrics, broken equally into two sections:

The first two metrics were focused on scale, which remains an important measurement tool on the basis that bigger numbers necessitate a higher level of management and administration – a skill in itself.

So, sales volume – or the value of the properties sold – and the number of sales were two metrics that, when combined, collectively made up half of each office’s overall ranking.

The final two metrics used in determining an office’s final ranking relate to its performance and efficiency, and it’s these measurements that allowed smaller players to more evenly compete with their larger counterparts.

Conversion rate was one of these metrics; this compared the number of listings against the number of sales made in the year, highlighting an office’s ability to move stock efficiently. Note that some offices recorded results above the 100 per cent mark because they also sold listings in the 2013/2014 financial year that were originally generated in the previous financial year.

The final metric within this section was office efficiency; this compared the number of sales agents and sales support staff against the total number of sales, providing a clear idea as to how productive each member of the team was.

All data was submitted online by senior management from each office, and where possible the numbers were verified by APM PriceFinder. Where required, Real Estate Business undertook additional research to confirm numbers with group head offices and/or the agency principals themselves.

APM PriceFinder sources its data from online listings, information gathered by its own collection team, and from various government sources.

While every effort has been made to ensure the quality of data, APM PriceFinder does not give any warranty as to the accuracy and completeness of the data. APM PriceFinder will not be liable for any loss incurred by relying on the information provided in the Real Estate Business Top 50 Sales Offices report.

Australia’s top sales office owes much of its success to a highly selective recruitment process.

Principal Mike Dobbin says Magain has been able to assemble a high-quality team thanks to a “very precious” hiring process that favours emotional skills over intellect.

Potential recruits first meet Mr Dobbin. The next step is to spend time with one of the agents. Interviews are more likely to happen in a café than a work environment.

Mr Dobbin says the Adelaide office won’t hire anyone who doesn’t seem likeable because recruits need to fit in around the office and make a good impression on clients.

“If we walk away after talking to that person and we would like to have another wine or beer with them or whatever, that is a real big tick,” he says.

“Anyone that is in after three years is already thinking of the next step, which is setting up some sort of franchise group and staying within the company,” he says.

Thinking of calling a staff meeting? Maybe you should cancel it. Less is more, according to high-flying Robinson Property.

The Newcastle office finished second on this year’s rankings – up from fourth in 2014.

Compared to the other Top 50 agencies, it placed second with 908 listings, second with 840 sales, fourth with 44.21 sales per staff and seventh with sales volumes of $405.6 million.

Why are staff so productive? Partly because turnover rates are so low, says director Guy Robinson. So why is everyone so happy? Because they’re not stuck in meetings, he adds.

“Most agencies meet once a week and I think most of those meetings are run for the importance of the sales manager or run as a demand from the principal, rather than getting any good practical outcome for the sales guys,” he says.

“We will only run a sales meeting every couple of months, and we fill that with as much as we can about relevant information that actually assists the guys to gain more listings and to make sales.”

Mr Robinson says agents are always so busy with listing and selling that it is always difficult for them to find time to attend a meeting.

Hockingstuart Bentleigh is this year’s biggest mover, making its Top 50 Sales Offices debut at number three in the rankings.

One reason for its success is clearly its boss, Nick Renna, who placed 16th in last year’s Top 100 Agents ranking.

Another reason is because of a strategic decision to put database management in the hands of specialist staff, Mr Renna says.

He says it’s wrong to let agents do it because their time is better spent with buyers and sellers.

But it’s also wrong to pass database management on to assistants because they prefer to spend time on their other responsibilities instead, he adds.

Mr Renna says one of his long-term plans for the business is to focus on residential developments.

“We have already started creating a database of apartment buyers and we are also making a lot of connections through financial planners and accountants to help sell these things off the plan,” he says.

“Also, we’re trying to become a specialist in townhouse developments because there is a lot of developing going on.”

One reason for the agency’s improvement was its decision 18 months ago to use business consultants, owner Andrew Ligdopoulos says.

“Because we had been trying to grow the business and trying to do things to the business, we kept coming up against the same problems,” he says.

“One, for example, was trying to recruit new staff. We kept finding we were adding to the team but putting in the wrong people or losing them at the bottom end.”

Mr Ligdopoulos says the consultants have also helped the agency maximise its productivity by bringing greater order to its processes.

“You can spend a lot of money on technology and a lot of that money can be wasted. So it was about using the technology we already had and trying to use it to its full potential,” he says.

“They are basic systems that most people would be aware of, but we just needed to implement them and have them followed by the staff.”

A never-ending education process is a key reason for the success of Tracy Yap Realty.

“We understand that vendors pay us to do a good job, not to do a lousy job. If we are not good enough, we have a lot of competitors everywhere; but if we are good, we don’t have any competitors.”

Ms Yap says she and her staff also work hard to build their local knowledge and reputation.

“Real estate is a personal business. We always show our vendors, our clients, our buyers that we appreciate them for all their help,” she says.

BresicWhitney wrote an extraordinary $732.1 million in sales volumes in 2013/2014 – almost 60 per cent better than its closest challenger.

Focusing on the booming inner-Sydney market clearly helped. But the agency has also made some clever choices, such as deciding five years ago to bring the creative work in-house. There are now four photographers and one copywriter on the payroll.

Director Shannan Whitney says while this is a big investment, it has allowed BresicWhitney to produce higher-quality creative content and establish a point of difference from its rivals.

“It is a part of modern-day consumerism that I think this industry is totally overlooking and has continued to overlook,” he says.

“We can’t expect our sales team to have confidence without delivering a product that is far superior to that in the market.”

This year’s Top 50 Sales Offices list contained several regional entrants – but there was one that stood out in terms of its distance from the nearest major urban centre.

First National Real Estate Collie & Tierney was ranked as the 40th best office in Australia, despite being based in Mildura, a town in Victoria with only 50,000 inhabitants.

For example, Mildura’s small population means the agency has to actively search for talented staff and then work hard to retain them.

“We spend a lot of time talking to our staff – working with them, making sure they are happy,” he says.

“We have got a very good social club here, we are very sensitive to staff and staff issues."

Search the rankings below by using the text filters

Sterling Publishing Disclaimer
Real Estate Business has undertaken a process to ensure the accuracy of data used to formulate the Top 50 Sales Offices ranking. Data for the ranking was supplied by individual offices and/or head offices. While Real Estate Business has attempted to validate the accuracy of data, any errors or omissions are the ultimate responsibility of the company or individual that supplied the data and associated information, and to the full extent allowed by law, or ranking participants, its publisher Sterling Publishing (Sterling) and Sterling employees excludes liability for any loss or damage sustained by readers arising from the supply, use, or promotion of the Top 50 Sales Offices ranking. 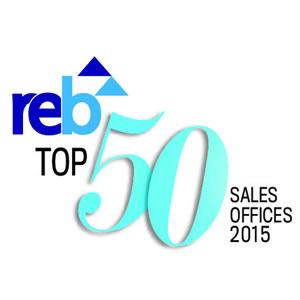